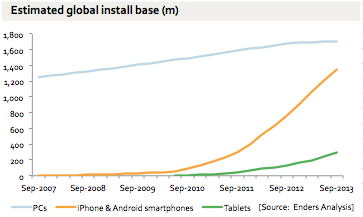 With every New Year comes a new set of trends to look for in almost any category one can think of. The world of technology is no exception, and already there are commentaries abound on what 2014 will bring us (and what it may leave behind). Here at Logic Solutions, we’ve gathered up just a few attention-getting trends that we think you may be interested in including the latest in wearable technology, the status of the smartphone, the importance of mobile web design and more. Read the details and see if you agree.

Increased Security and the Death of the Password
Whether it’s last year’s numerous revelations from Edward Snowden or various corporate breaches of passwords from the likes of company giants like Adobe, Evernote, and others, security is definitely a hot topic this year. Unfortunately, hearing about these breaches is becoming more and more common. According to their 2014 security predictions report, Trend Micro anticipates that a significant breach will occur on a monthly basis, and that has many businesses on high alert. PayPal’s CTO, James Barrese, looks on the bright side. “In 2014, we’ll see the emergence of authentication technologies that will begin to replace the password. This process has already started with fingerprint authentication capabilities included a number of new mobile devices. I believe that biometric technology will become a much more common way for users to authenticate themselves over the course of the coming year. In addition, I expect that we’ll see an outpouring of new ideas and new approaches to identity security that are aimed specifically at eliminating passwords as the primary way that people prove who they are in the online world.”

The Smartphone Passes the Personal Computer
Do you remember your first Smartphone? Chances are it wasn’t that long ago when you were playing with this cool new technology. Fast forward just a few years and what was once cutting edge is now mainstream. In fact, the Smartphone install base is positioned to surpass that of the PC in early 2014 according to a chart posted Enders Analysis researcher Benedict Evans.

With the Smartphone becoming a standard household object, nearly everyone has experience using it. According to a new report released on October 2013 by Common Sense Media, 72 percent of children age eight and under have used a smartphone or other mobile device for some type of media activity, up from 38% in 2011. With this growing target audience, it’s no wonder why Logic Solutions keeps busy with our app development practice!

Increased Focus on Mobile Web Design
With the increased usage of Smartphones comes a growing need for web design that functions well on mobile devices. Designers will put in extra hours in 2014 to ensure their websites respond to mobile devices and continue to look and feel good on smaller screens. The same goes for emails. In a study by Litmus, 51% of email opens are done on mobile devices. When marketers send out email blasts in 2014, they better make sure it looks good on a phone too.

Wearable Devices Become More Mainstream
Did you check out that Nike+ Fuel Band that we told you about in our newsletter last month? This is just one of many products in the world of wearable technology, and it’s a trend that is moving into the mainstream quickly. Tracking health data in real-time isn’t just for the elite few with the cool toys anymore. Wearable devices are becoming the next evolution from the smartphone, helping people to track various activities and behaviors. These types of devices are also growing interests in the medical field, particularly in the area of medical monitoring and the ability to convey data to hospitals and doctors in real-time.

3D Printing Experiences Significant Growth
3D printing may seem like a novelty technology, but more businesses look to implement the technology in 2014. The devices fit many budgets and cost between $500 and $50,000. Now that they are cost-effective, many companies are using the machines to design, prototype, shorten their product cycles and manufacturer goods. All told, experts expect shipments for 3D printers to be up 75 percent from last year. That number is going to continue to rise through 2015. As if 3D printing needed more legitimacy, airlines are even looking at 3D printing for manufacturing engine parts.