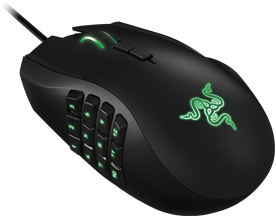 Last week includes upgrades to the best-selling MMO gaming mouse and plans to create a 300GB optical disc, but let’s start with biometric fingerprint scanning for your phone.

Security in your Hands

An iOS developer noticed that iOS 7 beta 4 supports biometric fingerprint scanning. Last year, Apple also bought AuthenTec for $350 million to use the firm’s fingerprint-authentication sensor technology. These signs allude to Apple integrating biometric hardware into its phones, but they aren’t the first. Motorola’s Atrix phone has been using it since 2011 and both Samsung and Sony are exploring such areas. Fingerprint authentication could lower theft of mobile devices and make online payments more secure.

The Razer Naga, the best-selling MMO gaming mouse, just level-up’d. The improvements include a broader-shape to accommodate more hand types and a gentler down-slope for the fourth and fifth fingers, which provides better grip and reduces fatigue. This powerhouse has a 19 programmable buttons, 1,000 Hz Ultrapolling, and 8200 dpi 4G laser sensor.

Mozilla and Blackberry Create a New Breed of Fruit

Two technology giants, Mozilla and Blackberry, have collaborated to create an open source software that helps developers and security professional find flaws in applications and programs. Peach v2 uses fuzz testing to detect potential security concerns. This “fuzzing” process involves injecting garbled data into an app or program and identifies any failures to handle the data. Mozilla and BlackBerry have both used this method to test their platforms to great success.

Microsoft Lets You Moderate Your Peers

Microsoft announced a new Xbox live beta program called Xbox Enforcement United (XEU, pronounced as “zoo”). Users who join XEU can provide opinions on whether particular content, initially just Gamertags, violate the Xbox Live Code of Conduct. Decisions from members will be fed into an algorithm, which takes into account not only how many people believe there was a violation of the Code, but also how accurate each person’s decision has been historically.

Rethink the Way You Store Your Data

Sony and Panasonic are working together to create an optical disc capable of recording at least 300 GB of information, with the goal of having this technology completed by the end of 2015. Comparatively, typical CDs hold less than 1GB of data and even Blu-ray dual layer discs can only hold 50GB. Optical discs are dust and water-resistant and can withstand changes in temperature and humidity; this makes them optimal for long-term storage of content.