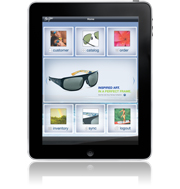 Logic and Maui Jim rolled out phases I and II of their Showcase App in 2011.  After delivering the core product—unifying order-entry functionality with high-resolution catalog imagery, rich design, and database integration—Logic supplemented the app to include brand new features such as 360 degree image rotation and multi-language support.

Creating full 360 degree views of products can be done through high-tech image rendering, or by multiple image rotation, as Maui Jim has done.  Image rotation is substantially less expensive than rendering, making this option accessible to companies with smaller graphic design and marketing budgets.

To achieve the rotation, Maui Jim provided 18 photographs of each of their products, snapping shots every 20 degrees in a full circle.  Logic’s team programmed the app to read the appropriate image in response to the user’s swipe on the iPad touch screen. The result is a virtually seamless, full-circle view of every product in Maui Jim’s catalog.

Maui Jim initiated Phase III on January 18, 2012, unveiling the latest iteration of Showcase to its 11 international distribution hubs.   With its entire global sales force—over 200 reps—now armed with Showcase, Maui Jim is primed to realize the benefits of B2B-geared mobile apps.  Larry Mills, Vice President of Information Technology at Maui Jim, states, “We have always offered our customers high-performance products, so it made perfect sense that our sales efforts should be of the same caliber.  It’s why we felt strongly about providing our reps with iPads and Showcase, and why we continue to enhance our app.”

Now the fastest growing premium polarized sunglass maker in the world, Maui Jim got its start in 1980 as a small company selling sunglasses on the beach in Lahaina, Hawaii. Seeing a need in the market for technology that could combat intense glare and harmful UV while bringing the brilliant colors of the island to life, our fledgling company engineered the revolutionary Polarized Plus lens.

More information is available at http://www.mauijim.com.