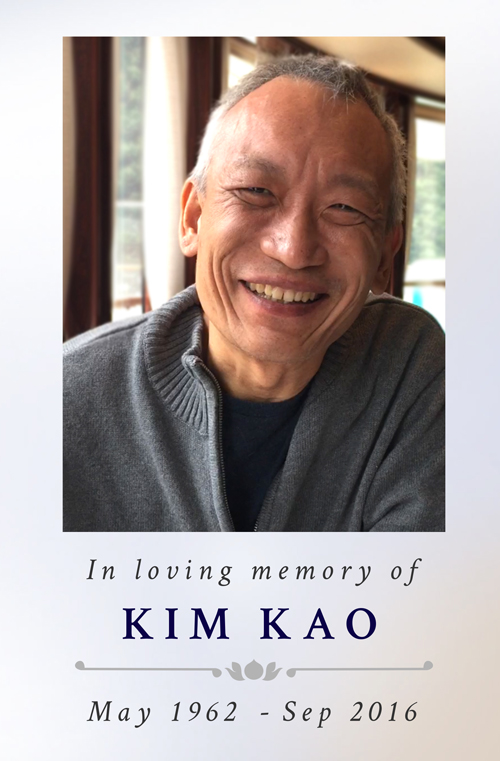 I first met Kim after my sister Amy told me that she wanted me to meet “someone that is very smart.” I thought, “Oh, yeah? Another one?” But, Kim was definitely different.

At that time Kim was getting an EMBA degree at UCLA, which is also where he met Amy. When I told him that I had degrees in electrical engineering and computer engineering, Kim said, “I have to show you this great thing that I am developing.” What he showed me were Laser Printer Labels that he was creating for Avery. That was about 30 years ago when the PC was becoming popular and people were using laser printers to print beautiful documents.

Kim first showed me this sheet of blank labels, then launched a software application which had the exact layout of the labels on the screen. He joked, “Jimmy, I am sure you want some address labels,”and after he typed my address on one label, it populated throughout the sheet. Then, he printed out a full sheet of address labels from the laser printer.

At that time, it seemed magical. But the magic was reality. It simply worked.

In subsequent years, he was always so excited to show me ideas and products, things such Barbie dolls with hair that changed color in the sun, and the Golden Eye of remote control for garage doors and lighting fixtures. Kim loved automotive technology. How he knew so much about every type of car is beyond me. Amy has always warned me, “Don’t get him started. He will not stop talking. He has so many ideas.”

When he got into the computer business with my sister Amy, he constantly came up with ideas for integrating simple hardware and software that led to mind-boggling products. That’s why Kim left Mattel in his early 30s, even though he was a rising star there. He had too much energy, passion, and intelligence to work for someone else.

Kim has been more a brother-in-law to me. He was a business partner, mentor, and role model. Although his degree from MIT was in chemical engineering, his scope of knowledge was way beyond his field of study. Similarly, Kim’s innovation goes beyond technology.

Recently I have been promoting the concept of “Lean Startup” at Logic. The basic idea of “Lean Startup” is to create a “Minimum Viable Product” through short and intensive cycles of “Build, Measure, and Learn,” so you don’t waste time developing things that people don’t want. Looking back, I realize that Kim was already preaching the same concept 20 years ago.

Then we were working on the idea of an automated business center that we called Business Anywhere. The value proposition was to have business machines located in hotels so that the guests could use them 24 hours a day. This would replace the current costly process of having a computer rental company (such as Logiclink) deliver and pick up computers, printers, fax machines, and etc. as needed.

The timing was perfect. I had just launched my own company, Logic Solutions, and I needed some projects to do. Kim asked me how much time I would need to create Business Anywhere. I said that it would probably take two months to complete. There were three major components, a hardware switching box to empower the chosen business machine, a software frontend for user interaction, and a way to accept credit card payments. The idea was innovative, but Kim wanted to have quick and simple solution to validate the market – quicker than two months.

So, I used a mockup language called Director (that I learned on the fly) to write the software because it would be much faster than traditional methods. I had my friend Klaus Wolter design a switching box that would take the output of the parallel (printer) port to control the business machine. I wrote a modem-based credit card processing software to communicate with the credit card processor, which at the time was First Data. And although some hotels did have access to the Internet, Kim wanted to keep every thing at the minimum baseline: every computer had a printer port, every hotel had phone line, and the touch screen kiosk could be disguised inside a box.

The first client or major installation was at the Los Angeles Hilton. Kim had the unit installed at a room in the lobby. Then he stayed there to court people to try it out. Once there were people in the room trying things out, he would run back to the minivan outside the hotel to watch the transactions go through modem line. He made sure that the user experience was so simple that even without a person inside to help, the payment system worked seamlessly through modem, and the machine was turned on for the user to use. Once it was proven that this was a product that people would use, Kim had his team make numerous iterations to perfect it. The basic hardware and software still work today.

There are many interesting things that Kim’s team has done to make the product easy to use, easy to install, and easy to maintain. At its peak, there were thousands of hotels and cruise lines accessing these Automated Business Centers. No matter where these business centers are, they just simply worked.

Angela Kujava, the Director of Innovation at Logic, wrote:

As someone who loves the power of language, I will remember fondly Kim’s gift for verbal gymnastics. Even when I was completely intimidated by his brilliance, talking with Kim was a delight because it seemed that he was interested in almost everything. There were many times that I struggled to keep up with is mental agility, but the truly wonderful thing was that Kim wanted you to keep up, and encouraged you to keep up. He genuinely sought out your ideas and opinions, and was ready to be challenged on his. Kim always made you feel respected, even when he was a million miles ahead of you.

Kim always told me that we need to be firm, but fair and kind to our employees. If it is something that he would not able to do himself, he would not ask it of other people. He once told a group of salespeople that they should be able to reach out to 100 new and old customers in a single day. When he sensed the hesitation, he dismissed the group and started calling a list of customers himself. By the end of the day, he renewed many contracts and talked to many clients about new ideas. He certainly went through more than one hundred hotels on the list in that one day.

Kim was one of the smartest people that I’ve met; he was forward thinking with a can-do attitude. 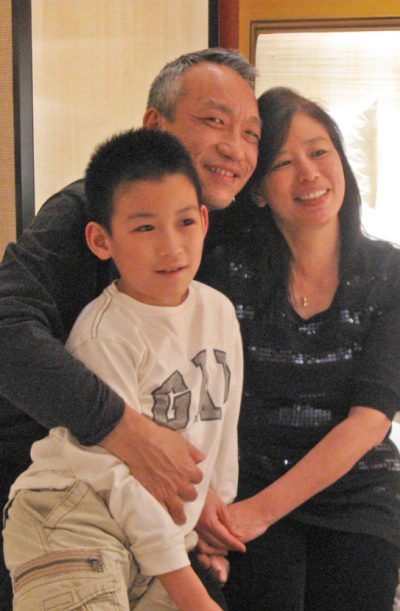 It is amazing that affection for Kim was so widespread. People who sold to him became his good friends, and his negotiation skills made the margin disappear. In fact, one of his hobbies was car shopping, and while doing so he would explain to the car salesman how the car was made, what the differentiation factors are, and how much fun it is to have such a car. He told the car salesman how to sell car to him. His knowledge of each car blew people away. At the end, he would often get a great deal and make a great friend.

Although we each ran our own company, occasionally we would go to pitch a new technology or product together. It was actually a lot of fun, especially selling in Vegas. When iPad first came out, Kim said, “It’s is time for us to do something different and fun.” I remember that he and I went to The Palazzo to show a MVP that we put together in a week. In front of several IT and business executives, he said,

“Imagine there was a line buster application that could help you quickly shrink lines at checkout, wouldn’t you want it?”

“Suppose that you need help during your time waiting, can you get the right help instantly?”

We asked one of the attendees to give us his cell phone number before we set up the demo. While Kim was explaining the product, I showed a form that their typical guests have to fill while at the delivery service office. And then I touched the HELP menu to bring up help in several different languages. Kim said, “Suppose Tom is the Spanish help desk. Jimmy, please get Spanish help,”so I pressed the Spanish key, and suddenly Tom’s cell phone started ringing. He picked up and I said “I need some help, sir.”

They were shocked. There was no telecomm connection on that iPad. It was before Skype, Whatsapp, or WeChat were popular. The truth was that we put together a temporary SIP server (some kind of telephony technology) so that we could use iPad to make a call via internet. But the executives all asked, “How can this possibly work?!?”

Kim said, “It is Vegas magic, and it simply works.”

That was Kim. He was an innovator, mentor, leader, and great friend to many. He made things work, made people smile, and he was simply brilliant. 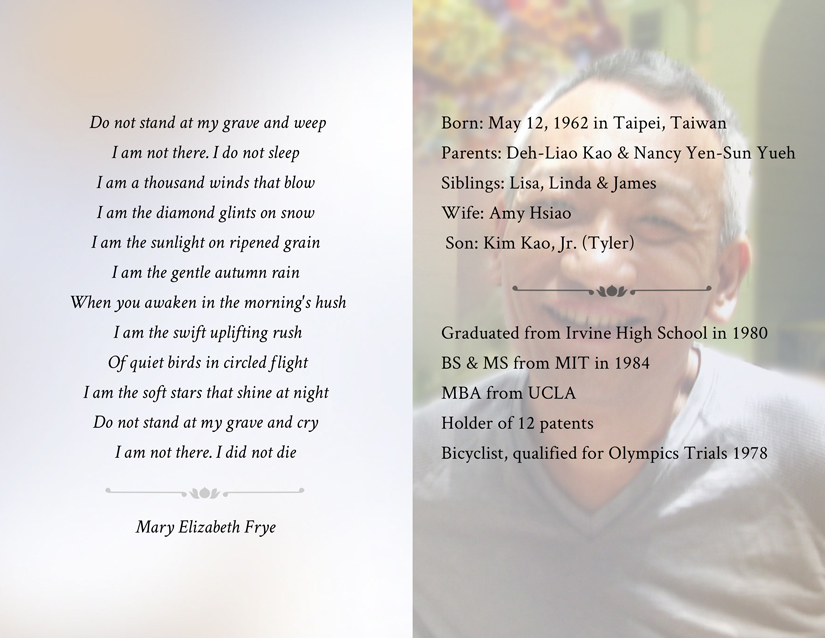