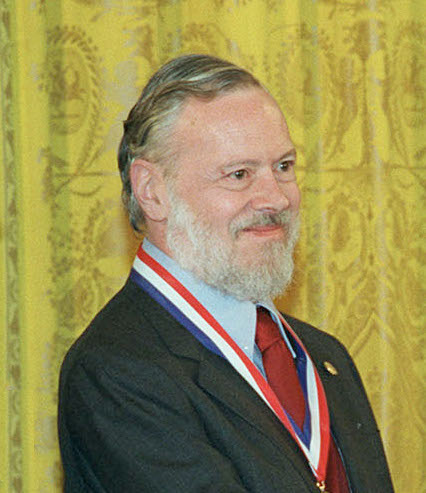 Last week, CBS Sunday Morning featured a segment called “Hail and Farewell” that paid tribute to the many influential people who passed away this year. It reviewed the lives of celebrities like Elizabeth Taylor, Steve Jobs, Andy Rooney, as well as the infamous, such as Muammar Gaddafi, Osama Bin Laden, Kim Jung Il.

There were a lot of people that I did not know in business, sports and entertainment, but that was a chance for me to learn a bit of history. I learned that one of my favorite tunes from the 007 movies was created by John Barry, and that the Nielsen ratings were created by Arthur Nielsen. As much as I was fascinated by almost all of them, I was dismayed (though not surprised) that the public media once again neglected some people of immense historical importance in academia and technology. One of the people that I would hope to be mentioned was Dennis Ritchie, who passed away in October 12, 2011.

Ritchie was best known as the creator of the C programming language and co-developer of the Unix operating system. These inventions are the foundation of so many technologies that we enjoy today. A large percentage of software that is written today is based on C language or the derivatives of C language, such as C++, C#, Objective C, and Java.

It is more than likely that every piece of the mobile software developed now is based on a derivative of the C language: Objective C for iPhone, Java for Android and Blackberry, and C# for Windows.

Then there is Unix. Although most consumers are more familiar with Microsoft’s operating systems DOS and Windows, which made Microsoft the biggest software company in the world, the backbone of internet has been long run on varieties of the Unix system. Billy Joy, co-founder of Sun Microsystems, wrote the BSD (Berkeley) Unix, which was the foundation of Sun OS. Unix was instrumental in bringing powerful workstations and the Internet to technologists. When the capability of personal computer hardware finally caught up to the power of Unix, the many derivatives Unix start appearing on a wide variety of machines. That list includes Linux on PCs and Mac OS on Macintosh, which has been based on Unix Mach Kernel since Steve Jobs returned to Apple.

It is disappointing that people such as Dennis Ritchie do not get the public recognition they deserve. When I considered the impact of his contributions more deeply, I thought that Dennis Ritchie’s innovations probably have an even more profound effect than Steve Jobs’ because they are pervasive in the machines and devices that we use today.

Our education system and media tend to worship instant heroes in entertainment and sports over than innovators who spent decades to create something to shape our lives. A few weeks ago I had the good fortune to have lunch with a computer science graduate student who was seeking for my advice about career. I asked him why he chose computer science as his concentration, and what kind of job he wants to pursue. He said that he loves programming and he wants to have a startup. I told him that I admire that the young people nowadays have the passion and courage to try things.

He talked to me about Steve Jobs, Bill Gates, and Mark Zuckerberg. I stopped short of asking him what he thinks of Dennis Richie, or whether he even knows who Dennis Ritchie is. I just hope that great computer scientists don’t all have to be Bill Joy, Larry Page or Bill Gates who became billionaires before they were considered “inspirational”. I certainly hope our educators and media will learn to tell us more about people like Dennis Ritchie; those who provide the inspiration to do good things…and not just for money.