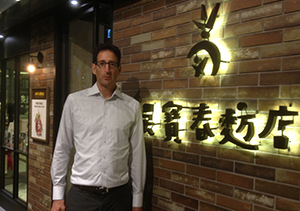 Apples
While in China last week, one of my nephews told me that he is such a fan of Apple that he would buy any new product the company releases. He believes Apple’s products are always innovative. So far he has accumulated:

He makes about $2,000 per month that has to support a family of three in China, but his story is not uncommon.

Two years ago I took a few iPhones and a few iPads to China to give away as the prizes of our annual Chinese New Year Party. Giving away prizes, large and small, has always been important practice for companies in China during the Chinese New Year party. For Logic, Apple products are always the top draw.

A few days after the party I noticed one of our secretaries with an iPhone 4 in her hand. I said, “Congratulations to winning the iPhone!” She said, “Oh, it is not from the party. I bought it myself.”

I then asked, “How much do you have to pay for it?” She said, “I bought it ‘water merchandise’ (someone brought in from outside China) so it was only 6,000 RMB.” I was almost speechless. That is about $1,000 USD, which was more or less the entire monthly salary of an experienced secretary in China.

This speaks to the fact that the Apple empire has conquered global users at almost all socioeconomic levels of the professionally employed population. Apple’s products are not considered attainable by only the wealthy. In my opinion, if people are going to splurge on luxury items, I would much rather see them spending their hard earned money on great innovation such as Apple products, rather than Prada or Louis Vuitton purses (which are also highly coveted items).

Rice
In the country where the rice is the food mainstay, it is only fitting that the most promising technology company is called Xiaomi. “Xiao” means “small” and “Mi” means “rice.” The founders Xiaomi bet their fortune on their confidence of their “small rice” products.

Those innovative products have taken the market by storm. It is difficult to imagine, but Xiaomi introduced its first mobile phone only two years ago, and it has already surpassed Apple, reaching 5% of the Chinese mobile phone market compared to Apple’s 4.8%.

Xiaomi operates like a combination of Google, Apple, and Dell. Similar to Dell, one can only purchase Xiaomi products directly through their online store. Their speed to market from concept to reality has been unprecedented.

Xiaomi’s attention to details is no less meticulous than Apple’s. Trusting their gut feeling with the details helped them to drive down the cost of supply chain, which is crucial to their success.

Like Android, Xiaomi makes use of open source technology. This applied with a philosophy of direct selling (to maintain profit margin), they were able to commit to a huge volume of production before launch. They hit the market with a fantastic phone at cost only 30% of iPhone or Samsung phones. The buying experience was very well designed. The combination of all factors has made co-founder Lei Jun the tech darling in China. He is often compared to Steve Jobs.

When I was growing up in Taiwan, the most common ways to greet people were “Have you eaten rice?”( 吃飯了沒有? ) and “Is your stomach full?” (吃飽了沒有?), instead of “How are you?”, which was adopted from the western world. For decades, China’s residents were generally poor, and having only one full meal of only rice was considered a fortune. It looks like that there will be plenty of hungry people for Small Rice Phones in the Rice Country.

Cherries
Although I often talk about technology companies that I admire, there are non-technology companies for which I have equal admiration, especially innovative ones. Three years ago, I had the fortune of visiting Bob Sutherland, one of the legends “up north in Glen Arbor. Bob owns the popular retail chain Cherry Republic.

I first learned about Cherry Republic when every one of my three children came home from an elementary school trip with some Cherry Republic products, but my trip there wasn’t until much later. It was arranged through the MEDC, and I was there to accompany some Taiwanese government officials who wished to investigate Michigan’s agricultural products for possible export to Taiwan. (As a resident of Michigan for more than 30 years, there is nothing more thrilling for me than seeing great Michigan products make their way to Taiwan.)

During the visit to Cherry Republic, it struck me how innovative Cherry Republic was: it wasn’t just a retail store, there are cherry restaurants, and wine bars, among the hundreds of cherry-based products. I was totally blown away by the seemingly limitless merchandising possibilities. I told Bob, “You need to go to Taiwan and Asia where people appreciate good food AND innovation.”

Two months ago, Bob reached out to me and said that he was ready to take a trip to Taiwan. I jumped on the opportunity to travel with the legend.

Bob is extremely humble and eager to learn about new things. The first day there, we went to a food show in South Taiwan. Bob was like a kid in a candy store, tasting great varieties of food and asking all kinds of questions. He was exited to learn about food innovation in Taiwan, all the while telling me about his plans for innovation. When we went through the catalog that I picked up from his store in Ann Arbor, he excitedly explained his latest innovation: Cherry Sausage.

We visited my friends who own a bakery store in Tainan where most of the famous pineapple shortcake is produced. It is the most famous souvenir in Taiwan. While there, the packaging of various types of food intrigued Bob. Afterward we were driving around and Bob started talking about possible local foods that could include cherry in the list of ingredients, such as the cherry chili dipping sauce for Chinese “hot pot” (Chinese fondue), cherry shortcake in addition to pineapple shortcake, and more. My friend said, “Bob never stops innovating, does he?”

Bob spent two full weeks in Taiwan, and I learned a lot more about him and Cherry Republic during this trip, including the fact that he had to really commit to innovation persistence to help him through the initial years of difficult business in a town of only 800 permanent residents.

For more about Bob’s trip to Taiwan, read his blog.

What is common about the empire created by Apple, the country conquered by Xiaomi, and the republic established by Bob Sutherland, is the founders’ passion for innovation and relentless appreciation of talent to attract the best and the brightest individuals to help them innovate. They established a culture the encouraged people with a commitment to passion and doing something new. These leaders are not inventors. They are innovators.

There is a subtle but important difference between these two words:

I have written quite a bit about my admiration for Steve Jobs’ ability to innovate. Unlike Al Gore, he did not invent internet (haha); nor did he invent Postscript, WYSIWYG design, mouse, smart phone, tablets, etc. He was able to introduce the world to some of the most visionary products in history because he recognized both great inventions and great talents.

Xiaomi’s Lei Jun did not invent Android, Smart Phone, Buy Direct, or the idea of squeezing supply chain. He somehow he put all these ingredients together to make an amazing company. Jun spent two to three years courting the best talent to co-found the company with him. They included the top individuals from Google, Levono, Microsoft, and Motorola. He claims that he spent 80% of his time recruiting top talent.

He recognized the importance of speed to market, and he needed individuals who could execute the best and fastest decision making process. His initial team of 52 people invested an average of $200,000 out of their own pocket so that the company had the initial capital of $11M required to kick off the manufacturing and marketing. These individuals had deep skin in the game, so he can trust them to make various decisions fast.

Obviously Bob Sutherland did not invent the cherry—he doesn’t grow cherries.
I can see the similarities he has with other successful businessman. Bob has assembled a small team in Glen Arbor (a city with a population smaller than that of my parents’ condo complex!) who are so passionate about making new products out of cherries and making Cherry Republic a household name. They continuously come out with fantastic products that are healthy, tasty, and inspiring.

Just as these leaders and their companies don’t see borders to innovation, I don’t see borders to Logic’s innovations, either. I have created a center of innovation at Logic, and have asked Angela Kujava to be our Director of Innovation. Although we have been innovating with products such as Showcase, Q EH&S, Logiclink Dream Apps, I hope to establish a culture where everyone is passionate about the impact they can have on our success, and the opportunity they have to bring their innovative ideas to life. I believe this will take Logic to a universe without borders.