My wife has been impressed by the fact that I have not left the country for almost two months now. But really, my travel has not stopped…it has just been mostly in the U.S. Here are some stories from the (domestic) road:

I have taken three trips to Chicago recently, and I enjoyed the windy city very much without the wind. Logic is setting up a new office in Chicago (at the Aon Center on Randolph). I stayed in three different places—the North Loop (Lincoln Park), Magnificent Mile, and South Loop (Museum Park)—and got a taste of different locations in downtown Chicago. I enjoyed walking along Michigan Avenue to the office. The architecture in Chicago is still the best among all the places that I have traveled. That is why I want our office to be in the center of the city where I can enjoy this spectacular view every time I go. With the recent released enhancements of Logic’s applications including Showcase, Quantum’s SDS, and others, we are hoping to attract the Chicago market to our products.

Amtrak – My Kind of Transportation

Normally I would say that traveling in the U.S. is so much easier than in China, especially with the availability of so many airports and rental car locations. The trip to Chicago poses a dilemma of options. I can drive myself to Chicago, which takes about five hours. I can fly to O’Hara Airport, and then take a cab or subway to the city, or I can take the train to Chicago.

I prefer to take the train to Chicago, and that is what I did on all three trips.

I am used to riding the train while I am in Japan, China, or Taiwan. However, the experience of riding the train is so different in Asia compared to the US. Here there have been few changes since I first rode the U.S. rail system 30 years ago. The two major noticeable improvements are that all seats have electrical outlets, allowing me to use my laptop all the way to Chicago (I use my iPad as an internet gateway), and the train conductors use iPods to scan the QR code on tickets (which could be printed or on your phone). Little else has changed for three decades.

I used to hate riding train from our Shanghai office to our Nanjing office (about the same distance between Ann Arbor and Chicago). With luggage, it could be a challenge to climb up the stairs of the old fashion train. In addition, there are usually a ton of people in the train station, where the sanitation is not always the greatest.

Over the last six years or so, the trains, railroad, and train stations have gone through revolutionary change in China. Travel from Shanghai to Nanjing takes about 1 hour and 25 minutes on the high speed train. Both train stations are enormous in size, and you can pretty much walk into the train without any kind of stairs. I wish that the politicians can do what is ultimately good for the public and bring the right technology to us so that I can get to Chicago in one hour and 25 minutes. Until that far-fetched dream is realized, I will continue to enjoy the old fashion train to Chicago from Ann Arbor. By the way, the business class comes with free pop and all-you-can-drink coffee for only about $20 more. What are you waiting for?

Finally I have one child out of college, entering the professional life. The whole family went to Philadelphia for my daughter Emily’s graduation from University of Pennsylvania. While on Penn’s campus, we typically get together at the bookstore. There I noticed that the book Give and Take was prominently displayed in the window.

My wife and I had just attended Adam Grant’s talk at the University of Michigan (he had a PhD from the U of M), based on Emily’s recommendation. He became the youngest tenured professor in Penn’s Wharton School of Business’ history.

I guess the most important thing that we learned from our children is their perspective of life. Emily has not talked much about her future job at Bain & Company, but she talked a lot about the book “Give and Take” as well as her upcoming trip to Nepal. The topic about who are “takers” and “givers” has become a major topic in the family conversation. I would highly recommend the talk and Adam Grant’s book.


During my one week of vacation in Philadelphia and New York, I tried to think about how one might travel without internet technology. We are so spoiled. Kayak, Yelp, Groupon makes life so much easier for my family, especially when we’re going from Ann Arbor to Philadelphia, New York, Dubai, and Nepal. Still, nothing can replace my great assistant Linda who has been on vacation for two weeks. She is so proficient in using these tools for me. In my eyes, Linda is definitely a “giver”.

At this year’s Asian Pacific Chamber of Commerce’s Annual Dinner (May 18, 2013), Jeff Yang of Wall Street Journal was the keynote speaker. He talked about the growing influence of Asian American in the US. Jeff is a blogger http://blogs.wsj.com/speakeasy/tag/tao-jones/.

There are three things that he talked about in his talk and blog that I can relate: PSY’s Gangnam Style video, Ang Lee’s movies (Life of Pi), and Tiger Mom’s influence.

We made a parody of PSY’s video back in December that garnered a lot of interest from our readers.

The “Tiger Mom” Amy Chua received a lot of mixed reactions among Asian American parents. I happened to be in Shanghai a few weeks after that Wall Street article was published. I read China Daily in the hotel every morning, and I came across this article about Tiger Mom and the reactive comments from various writers in the U.S., including our friend Frances Wang of Ann Arbor. Frances’s children and mine grew up together. Obviously, Frances has a very different perspective from Amy Chua.

Then, I was reading a few stories about Ang Lee last week in Vegas. I was thinking that while most people are talking about Tiger Mother, few know about another popular phrase about Chinese wife – Tiger Wife (母老虎). Chinese like to joke about someone has a “tiger wife” at home, meaning, he is afraid of his wife. Admittedly, Ang Lee’s wife, Lin, is a typical Tiger Wife. I was intrigued about the story because I think I also have a Tiger Wife at home (let me explain…)

After graduated from NYU, Ang Lee could not get anything going for six years, so he became a “Mr. Mom” at home. His wife had a PhD from University of Illinois in the field of biology. She became the sole breadwinner of the family for six years, giving Ang the freedom to pursue his passion. Even after he received two Academy Awards for Best Director (Brokeback Mountain and Life of Pi), she retained her lifestyle, completely dedicated to her work. And Ang Lee still treats his wife the same way. Compared to a lot of celebrities in the entertainment industries, their story is highly unusual.

When Ang Lee’s first blockbuster film Crouching Tiger, Hidden Dragon failed to win the major film award in Taiwan, a reporter asked him, “What is going through your mind?” He answered, “I am anxious to go home to listen to my wife giving me an earful of lectures.”

Ang’s “Tiger Wife” gave him time and room to pursue his passion. Ang’s behavior and respect for his wife is what Chinese typically call “husband must have a Tiger Wife at home”. My conclusion is that maybe it is debatable that tiger mom can produce accomplished children, but there is no doubt in my mind that a decent entrepreneur usually has a Tiger Wife beside him and the Tiger Wife needs to be respected. I know that I have one at home.

One of Logic’s salesmen, Mike Huegli, has had quite a bit of success peddling Showcase in Las Vegas. We believe we are exceeding 1000 users of Showcase now. www.showcasecloud.com

I also went to witness Logiclink’s (Logic’s sister company) Check Out app in action. Between the 11 hotels that have implemented Logiclink’s Hotel Ambassador app, I was glad to see that more than 5,000 people use the app every day to check out. We are pushing to roll out the rest of Logiclink Hotel Dream App in the next few weeks.

Emily responded that, “This is is just the way my parents travel. They don’t go to the same places.” Of course, when we showed up at Emily’s graduation, we made sure to dispel all the misconceptions. But that was Pennsylvania… 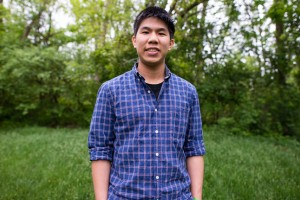 This morning, my wife woke me up and said, “Here we go again. We need to tell people that Andy is not raised by a single parent.” I said, “What are you talking about?!?” My wife said that Andy is on the front page of Ann Arbor News as “Young Citizen of the Year 2013.”

When my wife was reading the news (online), it only listed her name as his “parent”. There is no mention of any other parent. My wife said, “People will think we are divorced again.” The correction was made online after my wife wrote to the editor, but the print issue was already on the street with a “single parent” version. Technology wins again.

All and all, I ended up this month being a proud father, a proud husband, a proud giver, and sometimes a technologist.